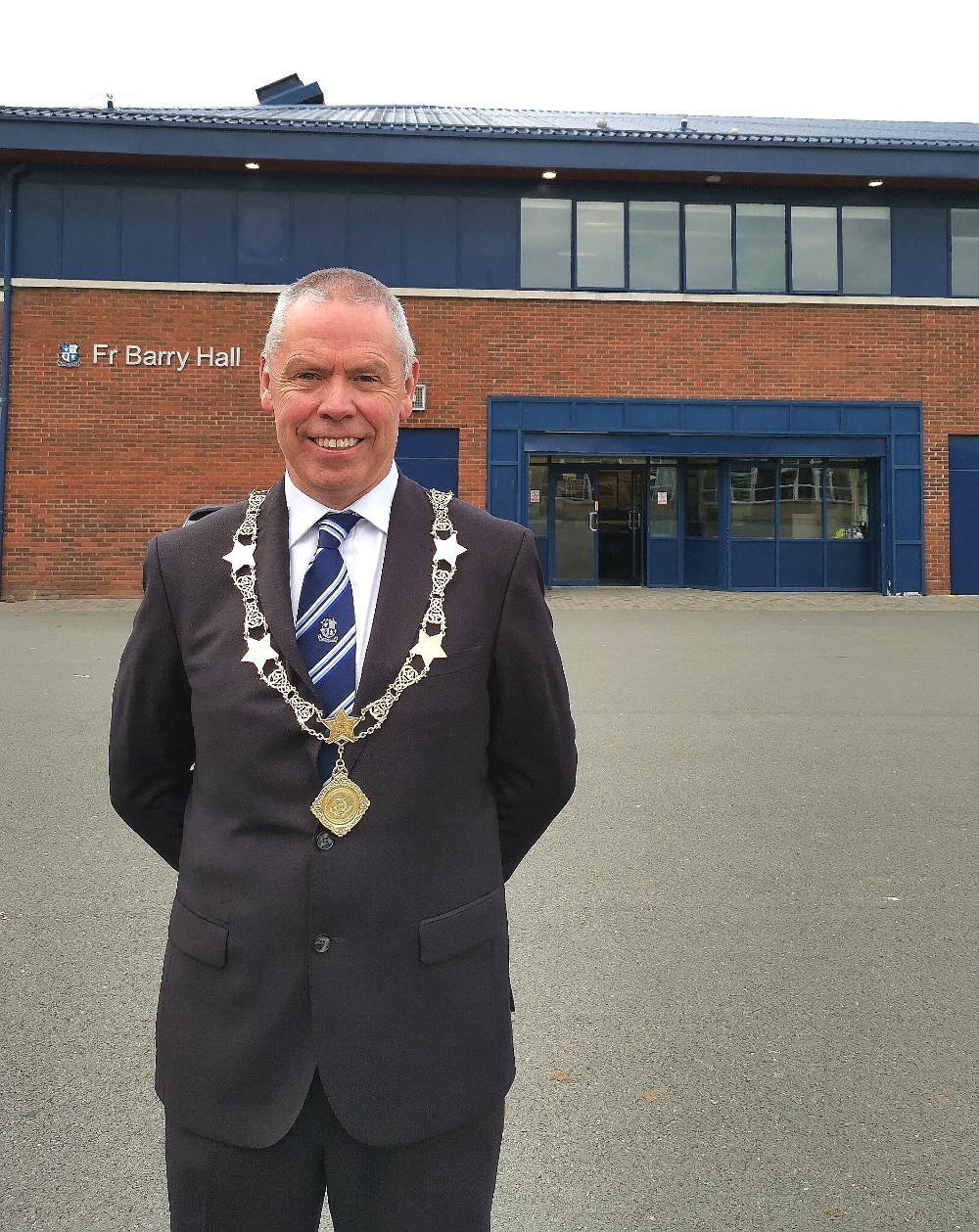 It is an enormous honour and privilege to take on the chain as your president for the next year.

I first like to thank Michael Fanagan for the great job he has done over the last 12 months..

The committee have also done a fantastic job – thank you.

A special mention to Michael Moriarty, Padraig Keogan, and David Ring thanks, and I would like to welcome Michael to the position of vice president.

And of course big thanks to Denis Murphy and Mary O’Donnell for all their help and cooperation without which the union could not function.

It was a bit daunting for a St Mary’s blow in like me to take over the presidency following in the footsteps of the guys with huge Mary’s pedigrees: Fanagans and Smyths and Colemans; and just to emphasise the point a Larney is joining the committee this year, Fiachra last year’s school captain.

My own son Tadhg just finished here last June. So it is perfect timing for me to welcome him and his year to the union.

How I ended up here in St Marys is probably a unique story. My mum Jean was from Kildysart in County Clare and my Dad Liam from Bundoran in Co Donegal. They both went to college in the 1950’s to study medicine and never left Dublin. When my brother Niall (1981) was nearly due to go to school my parents started asking the locals or neighbours where was the best boys school, the obvious choice was Terenure college. We lived at the far end of Templelogue Road.

Anyway one of our neighbours was a teacher in Terenure and he was a friend of my dad’s. He advised against his own school as it was too big and the boys can get lost. He advised St. Mary’s as it was a smaller school that would not lose a boy.

These must be the best words ever from a Terenure lad!

This was the spring before Niall was due to start Form 2 that September. Even in those days you needed to put your boys name down when he was a baby to guarantee a place. My mum didn’t know this and called in to put Niall’s name down for that September. She was not happy when they almost laughed at her, the class had been full for years.

Jean had an uncle high up in the holy ghost order and Archbishop John McCarthy in Nairobi, and she sent him a letter. There was a mini flurry of letters culminating in the Archbishop telling them in no uncertain terms to put an extra desk in the classroom for his grand-nephew.

Niall started that September and the rest is history. I would like to think we have done the school proud. Niall, myself and my late and very much missed brother LJ or Liam all went from Form 2 to 6th year, as have my son Tadhg and two nephews Eoin Livingston and Niall Jnr (the incumbent Niffer). Two more nephews LJ’s sons Tom and Joey are in the senior school.

I’ve recently re-read the Union constitution and the first paragraph states the 3 aims of the Union:

1 To stimulate friendship and co-operation among past pupils.

2 To strengthen and continue the good relations between the College and the union and to offer the services of the Past Pupils to assist the College in any way appropriate.

I would like to think we are achieving these goals and I will do my utmost to continue to do so.

We have a big year ahead of us – as you can see the new all weather front pitch should be ready this year. On behalf of the school and all the boys who will use it, I would like to thank everyone who has donated and helped in any way to get us to this point. I would particularly like to thank Peter Cosgrove and Denis Hickie who spearheaded the fundraising.

Once the pitch is ready we are hoping to relocate our annual past pupils soccer tournament to it.

The highlight of the union year is fast approaching, the annual dinner on Friday 15th November. This will be less than 2 weeks after the rugby world cup final, hopefully we can come together to celebrate a good performance. Please keep an eye out on social media and subscribe to our email list (email your details to ppu@stmarys.ie) to make sure you don’t miss any events. I am hoping to revive the Ezine this year with Maurice Davin’s help. I want to make sure to keep all of our members informed of upcoming events and give reports afterwards. After several requests at the AGM we are going to look into posting out a membership booklet / newsletter to our paid up membership.

I’ll finish up now by saying the college is going from strength to strength under the watchful eyes of Denis Murphy and Mary O’Donnell. The leaving cert results attest to that but are only a small part. I know my son’s year well who have just left and can confidently say you could not meet a sounder bunch of lads who encapsulate the St Marys spirit.